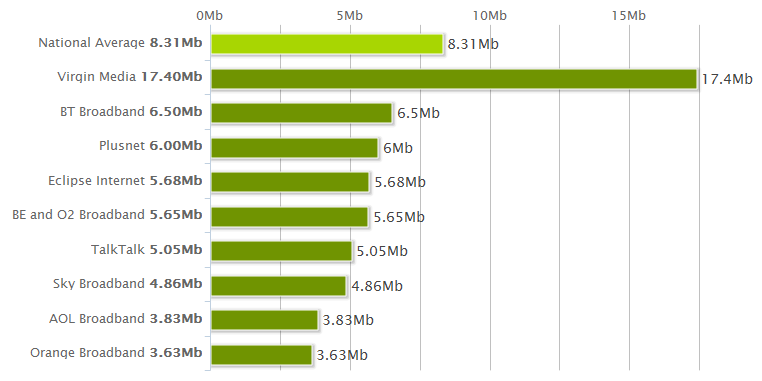 July 2011 saw the average download and upload speeds recorded by users of our Broadband Speed Test rise to 8.31Mb download and 1.22Mb upload! These are significant rises over last month's 6.69Mb and 1.03Mb. The increase is mainly fueled by Virgin Media who saw its average download speed surge forward by 6Mbps, clocking in at 17.4Mb across all speed tests performed in July. The cable operator's average upload speed also rose to 2.49Mb across the same period.

Virgin Media has recently announced that more customers than ever are opting to take packages of 30Mb or higher download speed, with cheaper prices for mid-range speeds thanks to the recent introduction of the high end 100Mb service which continues to roll out across cable enabled areas. Existing customers are also being offered incentives to upgrade from the provider's entry level 10Mb service.

Virgin Media engineers are a good way through the process of rolling out faster upload speeds region-by-region, automatically upgrading all cable customers to an upload speed at 10% of their download speed. The speed upgrade, which is due to be completed next month, means that all customers should see their upload speed at least double 2010 levels, while those on faster packages will see an increase of more than three times.

Providers offering Fibre to the Cabinet services such as BT's Infinity product and recently FttC activated provider Plusnet also saw significant improvements to download speed, with BT's average across all products rising to 6.5Mb download and Plusnet's rising to 6Mb download. Of the FttC providers, BT saw its upload speed rise the most, clocking in at 1.2Mb in July. BT and Eclipse are the only consumer-focused FttC providers to offer deals supporting the technology's full up to 10Mb upload speed capabilty.